Housing is a tangible manifestation of socio-economic status, critical in a developing a country like India. Housing acts as a significant contributor to employment and income generation, and helps the country directly and indirectly in their socio-economic development. The housing sector impacts a city’s spatial density, green cover, environment, degree of inclusion or exclusion of vulnerable communities, and other parameters. Hence it is one of the essential aspects for a country’s development. It also plays a role in sustainable growth, and hence despite being a state subject, it becomes a matter of national importance. The private market players dominate the housing sector; however, the policy interventions at the national and sub-national levels drastically shape the landscape of the housing sector in the country. India follows a three-tier governance structure with a division in administrative powers, roles and responsibilities of the centre, state and local government. Based on schedule VII of the Indian constitution, the activities listed in the central list and state list are administered by the central and state governments, respectively. The concurrent list incorporates affairs under the jurisdiction of the state and central government. As the land is a state subject, the state government has sole authority in land-related aspects like town planning, housing, building approval, building byelaws, etc.

In India, the residential floor area is expected to grow from 15.3 billion sq. m in 2017-18 to 21.9 billion sq. m by 2027. This includes housing in the municipal region, townships, and rural areas. The residential electricity consumption is projected to increase from around 1000 kWh per household in 2019 to 1500kWh in 2030. The increasing penetration of room air conditioners for space cooling which is projected to rise from 8% in 2017-18 to 40% in 2037-38 will also add to this electricity demand. The growing energy consumption in the residential sector calls for interventions to adapt to our global commitments of Sustainable Development Goals, Nationally Determined Contributions and net-zero targets.

Building energy codes are minimum energy efficiency standards for buildings and are formulated to reduce operational energy requirements over the lifespan of the building. The centre launched Energy Conservation Building Code, ECBC for commercial buildings in 2007 and Eco-Niwas Samhita for residential buildings in 2018.

ECBC sets minimum energy efficiency performance levels for new commercial buildings (including public buildings) with a connected load of 100kW or contact demand of 120 KVA and above. For residential buildings, Eco- Niwas Samhita aims to improve the thermal performance of the building to reduce energy consumption and associated carbon emission. However, the focus of building energy codes is primarily in the municipal regions. There is a significant proportion of development in the housing sector beyond the municipal boundaries. Thus, it is vital to capture the energy conservation potential of upcoming housing projects in such jurisdictions, which is not possible without involving multiple stakeholders like various housing-related governing bodies, consumers, industries and entities.

This blog briefly examines housing under different governmental, institutional bodies and how their administrative structure works. This analysis aims to understand the interplay of various settlements, the act that guides them, and policies that regulate housing construction in the region. The table below shows the governing body of identified settlement types. For example, the area under planning boundary is a state subject and falls under the Ministry of Housing and Urban Affairs domain. The state urban development department is the apex body for regulating housing activities in an urban area administered by the urban development authority. The state’s responsibility is to legislate acts, formulate guidelines, and rules for controlled development. In the case of the planned housing development in the given area, the concerned urban development authority prepares development control regulations to regulate the housing construction per the State’s Town and Country Planning act.

Table 1: Settlement and their governing bodies

These settlements are not mutually exclusive but rather depend on each other. A district may or may not have planning boundaries in that, and similarly, the municipal area may or may not be inside the planning area. Some settlements falling under SEZ are advised to have jurisdiction separate from already developed regions. The descriptive diagram below shows the interplay of various types of settlements at a district level. The central government can issue guidelines and prepare policies, missions, and other interventions to support the overall administrative structure, and the state governments can adopt these interventions by making some changes or formulating their new policy. Once the policy is formulated, as per the XII schedule of the India constitution, enforcement and monitoring take place at the Urban Local Body (ULB) level, i.e. the third tier of government. The figure below shows parastatal agencies’ administrative structure and position dedicated to housing.

The mapping gives a generic overview of the administrative structure in a state. However, this structure varies from state to state, and some of them may have a different number of departments under a separate name. Irrespective of the name and structure, what is essential is that the national government sets country-level goals & targets while state and local governments need to be working towards adoption and implementation. To function comprehensively, the governance system entails working with top-down and bottom-up approaches while ensuring complete vertical and horizontal coordination. Even though boundaries are not mutually exclusive of various jurisdictions, there is a requirement for the proper division of roles and responsibilities.

To capture the full potential of the housing sector for ENS implementation, it is essential to have coordinated action from all concerned stakeholders. Also, even though municipal regions cover most of the population, capturing what lies beyond the municipal boundaries would be wiser. Every attempt we make counts towards achieving our international and national sustainability goals. 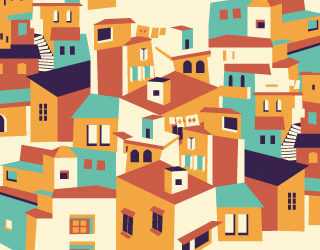